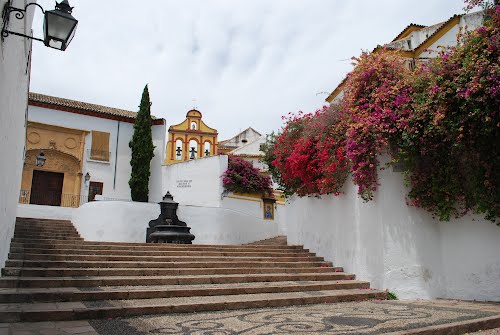 Within the historic center of the city and close to the nerve center of the Caliphate capital, we can find one of the most charming corners of it, as is the famous Cuesta del Bailío.

The Cuesta del Bailio has historically been one of the main communication routes, and served as a link between the upper city (also called Medina or Villa) and the lower one (called Axerquía), crossing until 1711 an arch that baptized this area.

The Cuesta del Bailio has an entrance between Carbonell and Morand streets, leading to the busy Alfaros street. It is worth noting the beauty of its 31 steps, in which beautiful mosaics unfold between the draining of them. These were created in 1943 as a result of the remodeling produced on the slope itself. The steps lead to a beautiful fountain that puts the climax to this emblematic slope.

In the background, we can find the Casa del Bailio, nowadays converted into a library where we find the history of Al-Andalus, which is lined with a Renaissance-style facade, and acquired its name as a result of the position held by its owner (Fray Pedro Núñez de Herrera, who was Bailío de Lors).

To see the Cuesta del Bailio you can access from the bottom by Alfaros Street, in the area where the Fernandine churches are located. And from the top, you will arrive from another of the most characteristic corners of Cordoba, the Cristo de los Faroles in the Plaza de los Capuchinos.