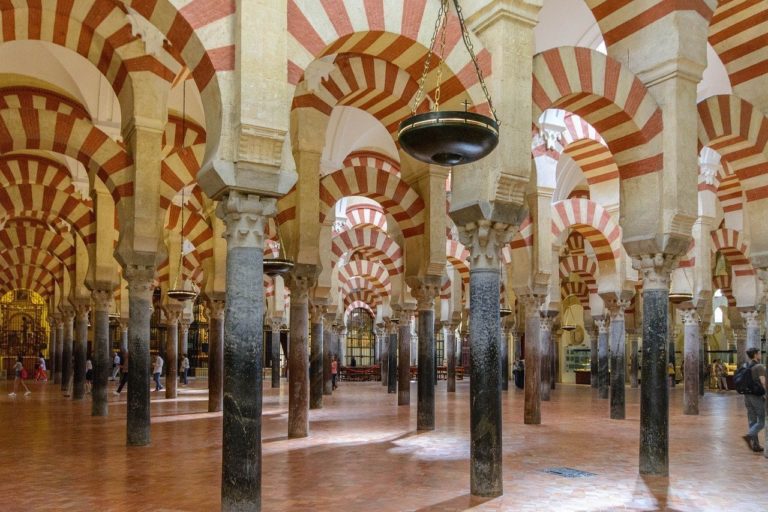 Tickets for the Mosque of Cordoba

The Mosque Cathedral of Córdoba is also the most significant monument of Al-Andalus, as the great Aljama of Córdoba has its origin in the eighth century (786) when the independent emirate is already consolidated, but reaches its greatest splendor in the tenth century with the Caliphate of Cordoba, maintaining its architectural body (basic) until today.

The Islamic building was built on a strategic site next to the Guadalquivir, which had been access to Córdoba since ancient times. On this site settled old Roman and Visigoth archeologies. The Mosque of Cordoba itself stands on the Basilica of San Vicente (located under the prayer hall of Abderramán I, excavated by D. Félix Hernández in the 1930s), whose remains can still be seen in one of the museum areas of the Mosque (in the south-west angle).

The Mosque of Cordoba is made up of three parts

The Patio de los Naranjos (retains a good part of its original appearance), which is accessed through the Puerta del Perdón, in the Mudejar style (1377), where the rows of orange and palm trees, the fountains and arches of Horseshoe that surround it next to the door rises the partially demolished minaret and surrounded, in the early seventeenth century, a “formwork” of Herrera style. The total area of ​​the monument is more than 22,000 square meters, with a length of 174 meters long and 128.4 long.

The door of Las Palmas gives access to the mosque: a forest of eight hundred and fifty columns of marble, jasper and granite on which three hundred sixty-five bicolor horseshoe arches rest, gives the measure of the splendor of the art of the caliphs at its peak . The mihrab, holy place of the mosque that indicates the South direction and not that of Mecca, in accordance with the will of Abderramán (towards the river because it took him to his native Damascus).

This is one of the hypotheses, but today the theory that the main nave of the mosque follows the orientation of the main street (thistle) of the old Roman Córdoba (Patricia Colony) is more accepted, as has been witnessed in the excavations archaeological performed in the city. The mihrab is a marble jewel, stucco and brightly colored Byzantine mosaics on a gold background. The lobed arches of the walls and the dome are preserved in the skylight. In the header the arches, the mosaics of the wall and the structure and decoration of the domes based on crossed arches stand out.

After the conquest of Cordoba by the Christians, they used the mosque to celebrate their cult, but in the 16th century, when Islam was finally expelled from the Iberian Peninsula, the victors wanted to adapt it to their beliefs: they built a Renaissance cathedral, in charge of Hernán Ruiz I, and then, of his son, in the heart of the mosque, altering the original perspective.